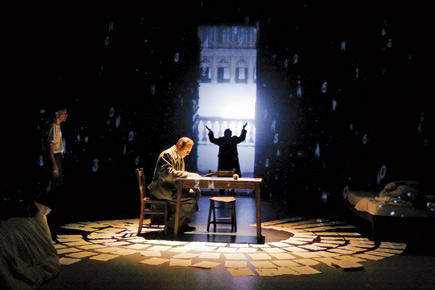 The theatre show I went to see for my birthday celebration… From its name and premise I knew it would combine the elements of science and theatre, making connections of past and present – through time, space, cultures and characters. I recalled the Robert LePage production I saw in 2003, Far Side Of The Moon, which was about the USSR-United States space race of the 1960s. It is only within this decade that theatre has looked into the sciences and history of science to link it with dramatic art.

Inspired by Hardy’s autobiography “A Mathematician’s Apology” the play begins with a humorous mathematical lecture introducing us to a rather complicated theory. We are then told (by another character) that nothing onstage is real (as he pushes the stage walls away, taking the lecturer’s prop glasses, “we are just actors playing characters”) but the maths – THAT is the only real thing here. There is no real need for the audience to understand the mathematical theory, for the essence of the story portrays the loneliness of genuis, the need to be rooted (addressing mankind’s global movement and modern identity) and the playfulness of mathematics.

Two main narratives weave in and out of each other, connecting cultures, ideas and times: Ramanujan’s work on number theory (the basics of string theory) in 1913, India, led him to Cambridge professor Hardy in England. Almost 100 years later in the present, an American businessman (of Indian descent but “born in Baltimore”) is in London and falls in love with a British mathematician. He seeks to understand his lover’s passion for Ramanujan’s mathematics, of which she follows his footsteps back to India. Both key characters die young, far from their homes. The husband goes back to his ‘homeland’ India to get closer to his departed wife, and all stories surround the nucleus human compulsion to understand.

The connections across worlds and echoes through time are paralleled, and the poetic narrative interweaves in a structure that is visually connected but is never an obviuos linear script (which is the complexity and the fabrics of devised theatre). The stage craft incorporates cinematic elements, bringing 20th and 21st century India and England together onstage, as one theatre critic commented, it was a “sense of being caught in a linear defying dreamscape” bringing together a montage of footage from Cambridge college hall to Indian streets, recorded voices and sounds, constantly shifting lighting and floating numbers projected from gobos.

Complicite’s visual approach to drama combines theatrical tricks and abstract ideas, such as chairs becoming carriages or airplane seats. Yet the production was less reliant on physical theatre than I expected – and its use of physical theatre was rather bland than what is usually brought to the table. It had much impressive technology to create the changing atmosphere and scenes, but sometimes it felt a little too reliant. The use of the revolving flap/lecture board to change scenes/time zones/cultures/story was swift, albeit a simple exercise.

Always a lot going on visually and a story that Complicite tells well, although the narratives, though well paralleled, do not always gel.

3 thoughts on “A Disappearing Number”

Hot off the Press

Are you looking for something?